3D Printing: Through the looking glass

It wasn’t too long ago that glass products were manufactured by glass-blowing – a technique that can be traced back to the 1st century BC and the basis of an artisanal industry still alive and well today.

The early 19th century saw increased demand for window glass (called ‘crown glass’ at the time) and in the 1820s, the age of blowing individual glassware was ended by the invention of a hand-operated machine. Machinery continued to be developed for precise, continuous manufacture of glass products. In 1902, Irving W. Colburn invented the sheet glass drawing machine which made possible the mass production of window glass. In 1959, float glass production was introduced by Sir Alastair Pilkington - by which 90% of flat glass is still manufactured today.

It seems we may be entering into a third period of glass manufacturing, thanks to the rising effectiveness of 3D printing. 3D printing has several advantages over other methods of manufacture: it is capable of producing complex shapes and forms that other methods just can’t match. 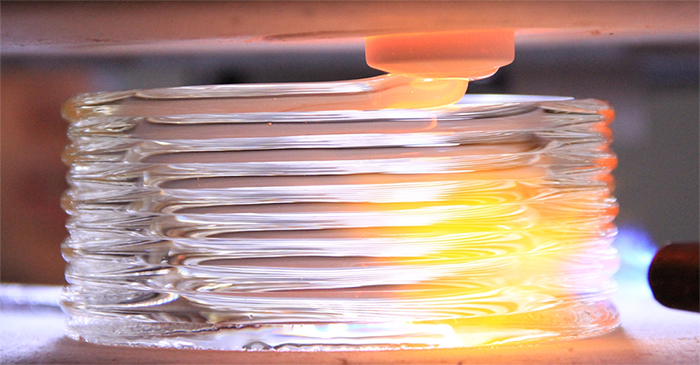 According to TechCrunch.com, the G3DP2 system uses a closed, heated box that holds the melted glass and another thermally controlled box where it prints the object. A moveable plate drops the object lower and lower as it is being printed and the print head moves above it. The system is interesting because it actually produces clear glass structures that can be used for decoration or building.

“In the future, combining the advantages of this additive manufacturing technology with the multitude of unique material properties of glass such as transparency, strength, and chemical stability, we may start to see new archetypes of multifunctional building blocks,” state the MIT researchers.

Across the pond, in a new paper published in the Journal of the American Ceramic Society, researchers from the University of Nottingham developed a laser powder bed fusion approach to glass additive manufacturing. Powder bed fusion additive manufacturing techniques use energy sources like lasers and electron beams to heat a bed of powdered material until it softens or melts. As the material cools, it fuses to the preceding layer.

In the JACerS paper, the researchers used the powder bed fusion technique of selective laser melting to melt soda–lime–silica glass powder and resolidify it on high-purity alumina disk substrates.

Researchers from the Centre d’Optique, Photonique et Laser (COPL) at Laval University, Quebec, Canada, took a different approach to glass additive manufacturing: fused filament fabrication. According to the American Ceramic Society, fused filament fabrication is more difficult than other additive manufacturing techniques for 3D printing glass, because most glasses have high melting temperatures. However, the COPL researchers performed fused filament fabrication using chalcogenide glass. Chalcogenide glass contains one or more of the chalcogen elements sulfur, selenium, and tellurium, and it softens at relatively low temperatures compared to other glasses. The researchers increased the maximum extruding temperature of a commercial 3D printer from about 260°C to 330°C. Then, they used it to produce arsenic sulfide glass filaments with dimensions similar to commercial plastic filaments. This method could potentially result in a breakthrough for efficient manufacturing of infrared optical components at a low cost.

Glass 3D printing has come a remarkably long way in a short period of time – only a few years ago, it didn’t exist at all, and now, it’s being developed and perfected by a number of organizations, using a number of different methods. The applications of 3D printed glass are many, from design and architecture to optics and microfluidics. 3D printing isn’t likely to replace other methods of glass manufacture, but it can certainly achieve some objectives that traditional manufacturing cannot, and is thus invaluable for certain applications.