The World Economic Forum’s (WEF) Meta-Council on Emerging Technologies (see below) has a tradition of naming the Top 10 Emerging Technologies to keep an eye on, and 2016 is no exception. Among this year’s Top 10: perovskite – a new photovoltaic material that offers three improvements over the classic silicon solar cell, with the new material being easier to make, useable virtually anywhere and, to date, generates power more efficiently.

A perovskite solar cell is a type of solar cell which includes a perovskite structured compound, most commonly a hybrid organic-inorganic lead or tin halide-based material (essentially a synthetic material), as the light-harvesting active layer. A perovskite is any material with the same type of crystal structure as calcium titanium oxide (CaTiO3), known as the perovskite structure, or XIIA2+VIB4+X2−3 (or more simply — ABX3) with the oxygen in the face centers. Perovskites take their name from the mineral, which was first discovered in Russia by Gustav Rose in 1839 and named after Russian mineralogist L. A. Perovski (1792–1856).

Perovskite has a number of unique properties that make it a great material for solar cells. Perovskites inherently absorb more light than standard solar cell materials like silicon and thus have a higher theoretical limit of current that can be extracted from the material. And contrary to silicon, the spectrum of light absorbed by perovskites actually increases with temperature – ideal for outdoor usage. Moreover, once the absorbed light generates electrons within the perovskite material, fewer of these electrons are lost thanks to uniquely low recombination mechanisms within the material. This has the impact of increasing both the current and voltage extractable from the device – important for achieving high efficiencies. 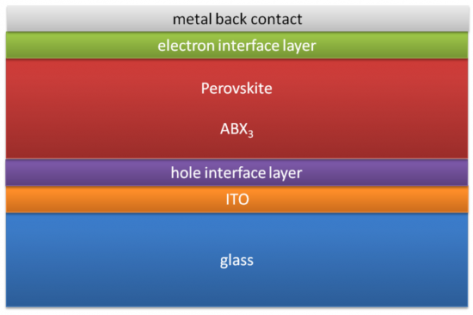 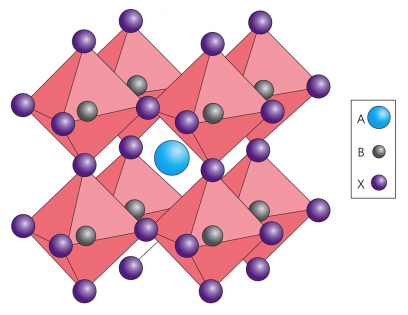 While perovskites sound like the perfect material for the photovoltaics industry, the material does have a number of drawbacks that are currently being investigated. Perovskite cells have shown signs of degradation when exposed to moisture and UV radiation – the sort of environments that modules in the field are expected to operate in.

Secondly, some of the highest efficiencies achieved have been possible only through the use of lead. There are environmental concerns with using lead based perovskite solar cells in large scale applications; since the material is soluble in water, and lead is highly toxic, any contamination from damaged solar cells would cause major health and environmental problems.

Substituting tin for lead, while promising, has exhibited some less stable structures with lower efficiencies.  A tin based perovskite solar cell has the structure ASnX3, where ‘A’ is a 1+ cation and ‘X’ is a monovalent halogen anion. However, tin based perovskite solar cells still require further technical development, due to the instability of the 2+ oxidation state of tin (Sn2+) in methylammonium tin iodide (CH3NH3SnI3), which can be easily oxidized to the more stable Sn4+, which has led to the reduction in the solar cell efficiency.

It is understood that perovskites can also be combined with standard silicon solar cells to create multi-junction tandem cells that combine the best properties of two different cell technologies.

Solar cell efficiencies of devices using these materials have increased from 3.8% in 2009 to 22.1% in early 2016, making this the fastest-advancing solar technology to date. With the potential of achieving even higher efficiencies and the very low production costs, perovskite solar cells have become commercially attractive, with start-up companies already promising modules on the market by 2017.

As we continue to press for clean tech solutions, materials such as tin will play an increasing role.

[The Meta-council offers a platform for advising decision-makers, regulators, business leaders and the public globally on what to look forward to (and out for) when it comes to breakthrough developments in robotics, artificial intelligence, smart devices, neuroscience, nanotechnology and biotechnology.]