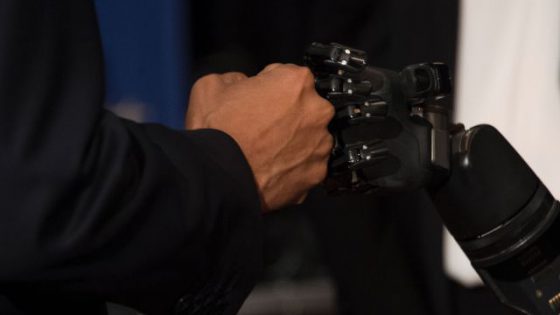 We’ve shared numerous articles over the years that illustrate a wide range of advanced medical technologies that have been made possible through miniaturization, or increased sensing, communications and computing capacities…all enabled by advanced materials. This past October, two events clearly profiled some of these advances.

The first saw a paralysed man shake hands with US President Barack Obama by using a mind-controlled robotic arm that is helping restore his sense of touch. Tiny chips implanted in Mr. Copeland’s brain let him use his thoughts to move the Star Trek-looking arm attached to his wheelchair. The technology development team reports clinical trials where blindfolded Mr. Copeland correctly identified which robotic finger they touched 84 percent of the time.

Harnessing brain waves to power prosthetics is a growing field, with a goal of giving the disabled more independence and improving artificial limbs. In recent years, experiments have been reported where paralysed people move a robotic arm to touch someone or take a drink simply by imagining the motion. Their thoughts activate brain implants that relay electrical signals needed to command movement. The signals are transmitted through a computer to the robotic limb (which of course incorporates miniaturized servos, motors, electronics, etc. that actually do the lifting and touching).

In Sweden, another man has also been able to experience the sensation of touch with the aid of a prosthetic arm. The bionic hand, which is able to detect the shape and solidity of objects, uses implants connected to nerves in the wearer’s upper arm to transmit electrical signals from sensors attached to the fingers to his brain. The prosthesis works using electronic sensors in the hand which detect tension in artificial tendons that control the movement of the fingers. This information is turned into an electrical current and a computer in the hand sends an impulse to sensory nerves in his remaining upper arm. While wearing the artificial hand, he also was able to distinguish between hard, soft, round and square objects even while blindfolded and wearing earplugs.

It is hoped that these technologies could be a step towards creating prostheses that allow the wearers to sense textures and even temperature, restoring almost complete sensory function to amputees. The sense of touch helps one naturally grasp with just enough force to hang on while not either dropping something or crushing it. As such, it is believed that new artificial hands could mean amputees could handle objects without having to rely upon watching their hands while also detecting how firmly they are gripping objects… though the development of such a fully functional ‘bionic hand’ is probably some years away.. 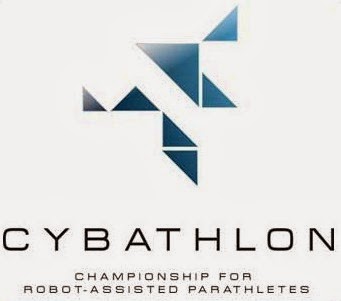 The second, and really spectacular event occurred on October 8, 2016 at the SWISS Arena — the world premiere Cybathlon!

The competition saw athletes, using the latest assistive technologies, tackle flights of stairs and prove their speed and skill using the most up-to-date modern prosthetics. There were races for athletes with powered arm and leg prostheses, for those wearing a robotic exoskeleton and for powered wheelchairs. There was also a race for cyclists using electrical muscle stimulation and even a brain-computer interface race. The competitions pitted skills in six disciplines and demonstrated how novel technologies can assist people with disabilities in their daily lives.

Cybathlon provides a platform to demonstrate advances and raise awareness around the development of novel assistive technologies that are useful for daily life… removing barriers between people with disabilities, the public and technology developers.

It has been reported that the competition was attended by 66 teams with some 400 contestants from various countries, and engaged some 600 volunteers and 150 international media representatives. The impressive sporting performances seemed to achieve the Cybathlon’s main goal: to encourage researchers and developers to make progress on assistive technologies. A second Cybathlon is planned to take place in 2020. (It will be interesting to look back at the further advances made during the next four years!)

If you have a few minutes, I would encourage you to click on http://www.msn.com/en-ca/video/news/disabled-athletes-prepare-for-cybathlon/vi-BBx7qjn?ocid=spartandhp and view some of the incredible athletes and advances in technology.

I sure you will agree… these Advances in biomedical engineering (mechanical, electrical, advanced Materials) really Matter.