I’m a relative novice when it comes to perovskite solar cells (PSC), but they certainly have been hitting the material science media recently. We have even posted articles here on Rare Metals Matters previously, as PSC’s have many advanced materials connections. On October 11, I noted that PSCs were one of the World Economic Forum’s Top 10 Emerging Technologies for 2016 and in September of this year we posted a brief description on the connection of tin to PSC – wonders never cease!

PSCs have great potential for providing cost-effective solar energy. However, heat stability presents a performance risk, and can significantly limit the solar cell’s long term efficiency, as the cell’s structure can degenerate over time. A solution has been to mix perovskites with other materials, such as cesium, that can improve the cell’s stability without compromising its efficiency in converting light into electrical current.

Well, further advances in the technology have recently been published in Science Magazine. A study by scientists from Switzerland-based École Polytechnique Fédérale de Lausanne (EPFL) has revealed a breakthrough. EPFL scientists seem to have stabilized perovskite solar cells by integrating rubidium into them. The innovation is reported to push power conversion efficiency to 21.6%… essentially a next generation PSC. 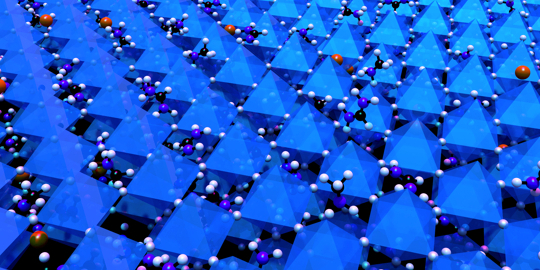 The EPFL scientists’ integration of rubidium cations into perovskites has apparently shown the maintenance exceptional stability over 500 continuous hours in full sunlight at 85°C. The project also showed that perovskite cells built with rubidium make available voltage close to the so-called “thermodynamic limit,” which is the theoretical maximum efficiency of converting sunlight to electricity.

Rubidium is a chemical element with symbol Rb and atomic number 37. It is a soft, silvery-white metallic element of the alkali metal group, with an atomic mass of 85.47. Elemental Rb is highly reactive, with properties similar to those of other alkali metals, including rapid oxidation in air and violent reaction with water. To ensure safety and purity, Rb is usually kept under a dry mineral oil or sealed in glass ampoules in an inert atmosphere. Rubidium is the 23rd most abundant element in the earth’s crust and rubidium compounds have various chemical and electronic applications. Rubidium metal is easily vaporized and has a convenient spectral absorption range, making it a frequent target for laser manipulation of atoms.

However, the current small number applications and the lack of a mineral rich in rubidium limits (it is usually a by-product of other mineral production) has limited the production of rubidium compounds. This recent breakthrough in PSCs could lead to the cost-effective, large-scale manufacturing of solar cells. EPFL has submitted a patent based on the innovative new cells.

If you would like to read a bit more about the EPFL initiative, just click on https://techxplore.com/news/2016-09-rubidium-perovskite-solar-cells-percent.html or http://science.sciencemag.org/content/early/2016/09/28/science.aah5557.

Be it rare earths, lithium, tin or rubidium, Advanced Materials do Matter!