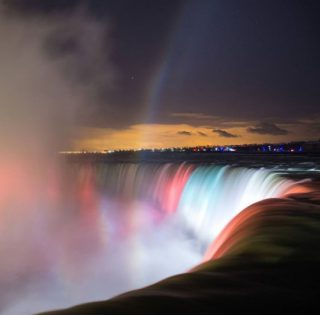 Since the late 1990’s, Niagara Falls have been lit with 21 Xenon spotlights… that is, until mid-December of this year.

Lighting the mighty Niagara Falls actually goes back some 150 plus years. In 1860, the Falls were illuminated in celebration of the then Prince of Wales with about 200 coloured and white calcium, volcanic and torpedo lights. These lights were called “Bengal lights” and were the kind used at sea to signal for help or give warning.

Electricity was first used to illuminate the Falls about twenty years later, in January 1879, with the illumination power of 32,000 candles – just a fraction of the intensity used today.

In 1907, General Electric designed a lighting system consisting of some thirty-six projectors with a combined candlepower of 1,115,000,000. In 1925, twenty-four carbon searchlights, each 36 inches in diameter and emitting a total of 1,320,000,000 candlepower, were installed.

In 1997 and 1998, new fixtures replaced the outdated lamps and fixtures. This doubled the intensity of the lights on the Falls (without doubling the electricity bills). Up until earlier this month, the 21 76cm (30 in) diametre xenon lights illuminated the Falls in a rainbow of colours. Each of the xenon spotlights had a brilliance of 250 million candlepower. The Xenon fixtures had to be replaced every 1,900 hours.

Earlier this month, the “retro, search-light-style lighting” was replaced by 12,600 LED lights. The new sources will provide twice as much illumination as the aging fixtures that they are replacing. The new fittings will last for twenty years or longer, drastically reducing maintenance costs. The fixtures will also consume much less electricity.

The new fixtures, consisting of 1400 individual LED luminaires (grouped into 68 zones of control, 20 for the American Falls and 48 for the Canadian Falls), will give Falls’ authorities a greater palette of more than 18,000 different color combinations, with which to light the landmark, complete with the ability to create programmable lighting displays.

The Solid State Lighting (SSL) retrofit project is intended both to enhance the Falls experience for visitors and to deliver the energy efficiency and longevity associated with LED lighting. This outdoor SSL system is purported to deliver light levels that are 4 to 14 times brighter than the Xenon lighting, depending on the colors being projected. Moreover, the uniformity of lighting has been improved with light now filling gaps in the coverage of the prior system, with claims that it also delivers a “crisper visual image of the waterfalls.”

The LED system reduced energy consumption by 60 percent relative to the Xenon lighting. And the consortium of companies behind the project designed it to operate relatively maintenance-free for 25 years.

Over 20 million people visit both the United States and Canadian sides of Niagara Falls each year.

T’is the season… and in the spirit of this colourful time, why not this brief look at the history and advances in technologies, all the while knowing that rare metals and advanced material make them possible!

All the best of the season and best wishes for a happy, healthy and safe 2017!