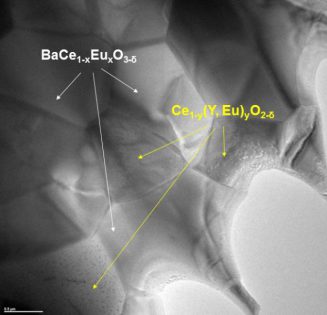 As April Gocha noted in her piece on CeramicTechToday (December 13, 2016) “Fossil fuels still largely power our world – but their combustion creates a host of harmful waste gases.”

Growing use of renewable energy sources helps decrease the production of these waste products. Furthermore, there are now novel technologies available that make fossil fuel utilization a cleaner process.

Ceramic hydrogen separation membranes offer the possibility of not only helping to cut greenhouse gases from waste gas streams, but also to convert some of that waste into fuel through isolation of pure hydrogen gas—which can then be used as an energy source to power fuel cells. Hydrogen separation membranes can offer benefits to other energy-intensive industries beyond fossil fuels, too—including steel, glass and cement industries.

Ceramic membranes are a type of artificial membranes made from inorganic materials, such as alumina, titania, zirconia oxides and silicon carbide, with titania and silicon being more stable. In some less frequent cases, tin or hafnium are used as base elements. Each oxide has a different surface charge in solution. Other membranes can be composed of mixed oxides of two of the previous elements, or are established by some additional compounds present in minor concentration. The first ceramic membranes were produced in France in the 1980s for the purpose of uranium enrichment in the nuclear industry.

It is noted, however, that current hydrogen separation membranes fall short in several areas: the membranes operate at high temperatures (i.e., the process is energy-intensive); current membranes aren’t stable enough and don’t separate gases fast enough, because they suffer from low hydrogen flow rates; and the entire separation process is expensive.

Improvements could be coming, as researchers at Forschungszentrum Jülich, a member of the Helmholtz Association of German Research Centres and one of the largest interdisciplinary research centres in Europe, have developed a significantly improved stable ceramic hydrogen separation membrane that can enable a hydrogen flow rate that is nearly double that of other separation membranes.

To bypass the limitations of individual materials, the Julich research team explored two-phase membranes based on perovskite and fluorite. Their membrane mixes together barium cerate doped with europium oxide (BCEO) and cerium doped with yttrium and europium oxide (CYO).

As noted in Gocha’s article, based on the institute’s recently published research paper on Scientific Reports, “The individual grains are only a thousandth of a millimeter in size and exhibit both ionic and electronic conductivity. The team’s two-phase BaCe0.8Eu0.2O3-δ:Ce0.8Y0.2O2-δ membrane, just 500 µm-thick, allows hydrogen protons and electrons to separately pass through the membrane. Protons occupy crystal lattice vacancies in the ceramic membrane and are driven through the membrane by pressure differences and temperature.” The ceramic membrane also functions at lower temperatures of 600–700°C.

The research effort is still in its early stages, and will of course need to significantly scale up if it is to be used in industrial application. However, it continues to intrigue me that even small amounts of Rare Metals in advanced material science Matter!