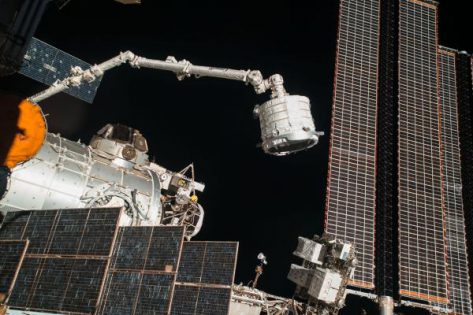 Much like any gadget you’ve ever owned, the International Space Station (‘ISS’) also needs new batteries from time to time.

As David Grossman reported on popularmechanics.com on Dec 30th, “The ISS will be setting up six shiny new lithium-ion batteries in addition to some new adapter plates.” The ISS received the batteries in December 2016 to replace 12 older nickel-hydrogen batteries, with the work completed during two spacewalks on January 6th and January 13th. The nickel-hydrogen batteries have powered the ISS in one form or another since the earliest designs of the space station in 1988.

The old ISS power system was the first on-orbit use of such a large quantity of nickel-hydrogen batteries. However, neither nickel nor hydrogen can match the energy-capturing power of lithium. The high-energy density of lithium (energy that can be stored in the element’s atomic bonds) make it an easy choice. Lithium-ion batteries are also easier to recharge, and are set to last for ten years—longer than the ISS plans on being around.

While advances in energy storage and energy generation technologies have been remarkable, one can only be awe struck by the technologies that underlie the installation program itself - which involved robot arms and two spacewalks to complete. It is understood that without the remotely-controlled arm operations, it would take six spacewalks to carry out the battery swap out. This will be the most complex remotely controlled robot arm work yet implemented aboard the space station: an intricate, multi-step, multi-shift procedure that resembles a shell game of sorts, with old and new batteries moving to and fro between a cargo pallet, temporary mounting fixtures and a solar array electronics unit.

The first set of six replacement batteries was carried to the station aboard a Japanese HTV cargo ship. Flight controllers in Houston used the station’s robot arm, equipped with a multi-appendage hand-like special purpose dexterous manipulator to remove a pallet carrying the new batteries.

Six adapter plates also were carried up on the HTV. The adapter plates feature cables and circuitry to connect the new lithium-ion batteries to the station’s power grid.

As a side note, the installation of the new batteries will mark the seventh spacewalk of NASA crew member Peggy Whitson. This is Whitson’s second time aboard the ISS, the first woman to command the station twice.