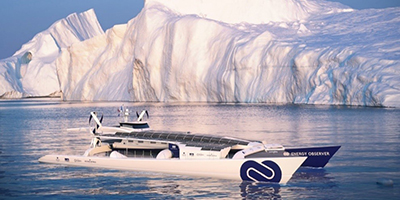 In April earlier this year, the Energy Observer was launched with the intention of becoming the first hydrogen vessel to sail around the world. The vessel will test and prove the efficiency of a full production chain that relies on the coupling of different renewable energies.

The boat has left for a world tour lasting 6 years, including 50 countries and 101 ports of call. This could be the ocean-going equivalent of last year’s solar-powered plane, Solar Impulse 2, that circumnavigated the globe. The Energy Observer will produce hydrogen from the ocean by cleaning and purifying the water, electrolyzing it and compressing it in tank storage. Both are bids to optimize the effectiveness of hydrogen as a readily-available renewable fuel.

The Energy Observer is actually an ex-racing catamaran that has been reconditioned and can now generate hydrogen from 130 square metres of solar panels, two wind turbines, a traction kite and two reversible electric motors.

The Energy Observer was originally built in Canada in 1983 and was the first racing sailboat to break the symbolic 500 miles limit in 24 hours in 1984. A team of over 30 architects, designers and engineers spread across France have worked since 2015 to refurbish the catamaran. The boat has since been lengthened four times and is now 30.5 metres long, almost 13 metres wide and weighs 28 tonnes.

Excess wind and sun energy can be kept on board in the form of hydrogen, as it is very light and has three times the efficiency of fossil fuels.

In addition to the facility to produce and store hydrogen from seawater, the vessel is equipped with a lithium-ion battery system. The system, which has proven experience in marine applications, can store the energy produced by the solar panels, and will be combined with electricity generated by the hydrogen-fed fuel cell used to propel the vessel forward and supply the auxiliary systems. The battery system will be made of the Flex EP7 modules, as well as the BMS and Master-BMS battery management systems.

While I have not explored the detailed the energy system equipment specs, one can comfortably assume that a broad range of advanced materials - the likes of lithium, zirconium, tin and the rare earths - will certainly enable the components and assemblies to ‘motor’ the Energy Observer.