Cars of the Future… Technology, Advanced Materials and Expectations

“Anyone who focuses solely on the technology has not yet grasped how autonomous driving will change our society. […] The car is growing beyond its role as a mere means of transport and will ultimately become a mobile living space” - strong visionary statements by Dieter Zetsche, head of German/ international automaker Daimler Mercedes-Benz. 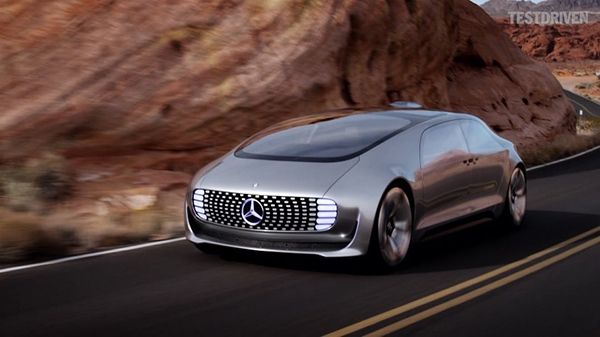 The Mercedes’ F015 Luxury in Motion research car is one innovative perspective into the future of mobility, built around a future scenario that incorporates many different aspects of day-to-day mobility. Its scenario perceives the motor car as a private retreat in addition to its mobility function. As such, this visionary vehicle raises comfort and luxury to a new level by offering a maximum of space and a lounge character on the inside. 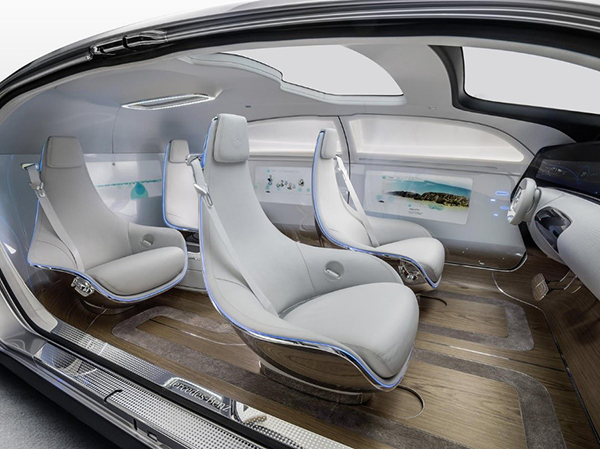 In visioning the car of the future, one had to fit into Mercedes’ base case scenario - the City of the Future 2030+ in which “urbanization has continued to advance, and the little urban space there is today is scarcer than ever. In an urban environment where space is at a premium and everything happens at a hectic pace, people have a growing desire for privacy and a place to retreat to. Autonomous driving is taken for granted – it is accepted by society and the technology is perfectly reliable. As the autonomous car takes over from the driver in situations where driving isn’t much fun, such as slow-moving traffic, it gives real added quality to time spent out on the road.” And as we’ve experienced with many technologies…if you can dream it, it will eventually be developed.

Passengers in self-driving cars could use their newly gained free time while travelling for relaxing or working as they please. The pivotal feature of the innovative interior concept is the variable seating system, with four rotating lounge chairs that allow a face-to-face seat configuration. 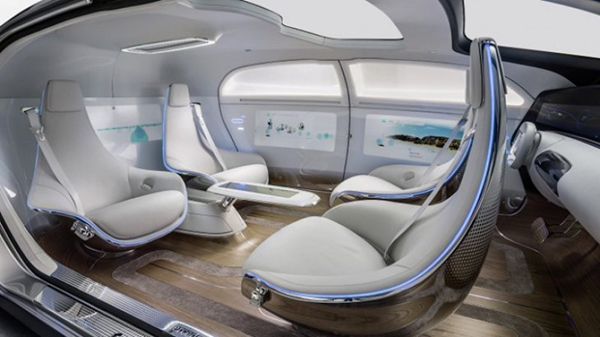 One core theme of the innovative interior concept is a continuous exchange of information between vehicle, passengers and the outside world. Displays mounted in the instrument panel and rear and side walls will make the interior of the F015 Luxury in Motion a digital living space. Passengers will be able to interact intuitively with the vehicle by means of gestures or by touching the high-resolution screens.

The F015 Luxury in Motion also communicates with its surroundings both visually and acoustically. Large LED displays at the front and rear, as well as a laser projection system directed toward the front, are responsible for the visual aspect, while the acoustic communication repertoire includes both sounds and specific spoken instructions.

A high-precision laser projection system allows the F015 Luxury in Motion to project a broad cone of light onto the road in front showing important information: for example, a virtual zebra crossing.

The high-strength body of the F015 Luxury in Motion ensures optimum safety and supreme comfort for its passengers. At the same time, the bodyshell’s structure provides the ideal basis for impact-protected installation of an F-Cell Plug-In Hybrid drive system. The electric hybrid system has a total range of 1,100 kilometres of zero-emission driving, including around 200 kilometres of battery-powered driving and around 900 kilometres on the electricity from the fuel cell. (This enables the F015 Luxury in Motion to cover distances similar to those of a comparable diesel-engined car, but purely on electric power with zero local emissions).

It is clear to me that behind the luxury stylings are a trove of technologies – for example, to produce and manage energy production, to provide sensing and communications infrastructure that interfaces with passengers and directly with other vehicles on the road, or just structural integrity and efficiency - hence the future of transportation will only made possible with a suite of advanced materials.

There are all kinds of scenarios, outlooks and predictions of what cities and technologies applications will look like in 2030. If you have a few minutes, click here or here peruse the attached, you’ll probably say ‘of course’ to some, and ‘they gotta be kidding’ to others!