According to the World Bank, nearly half of the world’s population (of 7.6 billion people) now have access to the internet. I must confess that when I read that number I thought it was low - I think I take the internet for granted here in the West. But the numbers don’t lie, for 45.91% of the world is now connected to the World Wide Web in one form or another. More and more people are joining the online community - in 2015 the comparable number was 43.918%, and in 2014 the number was 39.93%. To put that into some sort of perspective, each 1% increase in internet usage represents, in terms of the 2016 population, 74 million people. That is the population of two Canadas!

All of these people coming online are accessing it in the usual ways: phone lines, fibre optic cables and our favourite, mobile phones. This means we are all using the same materials… copper in the phone lines, silicone, yttrium in fibre optic cables and the rare earth elements, tin, indium and lithium ion battery that make our mobile phones work.

And it is not just access to the internet that will increase the demand for raw materials: all available technology is going to be accessible to more and more people. This is fantastic, as more people can look forward to an increased standard of living. The internet is going to be one of the enablers of this, allowing for the instantaneous diffusion of knowledge across the globe. It is also good news for all those involved in the materials sector, as more demand equates the need for more production.

In order for people to enjoy this increased standard of living, sustainability will be of greater concern to those harnessing these technologies for the first time. Adopting best practices is going to be key to the thriving, liveable urban centres of the future. Advanced technology, enabled by advanced materials, is what will allow this future to take shape. Whether it is in the neodymium in wind turbines, indium in solar panels, or the lithium needed to store the energy from both, we’re going to need an ever increasing amount of these materials. Recycling and efficiency will help us get some of the way there, but we will also need many new producers able to meet the demands of the dispersion of technology around our world. It’s certainly exciting. In the time it took you to read this, 850 people joined us on the internet. In terms of the 2016 population that is. 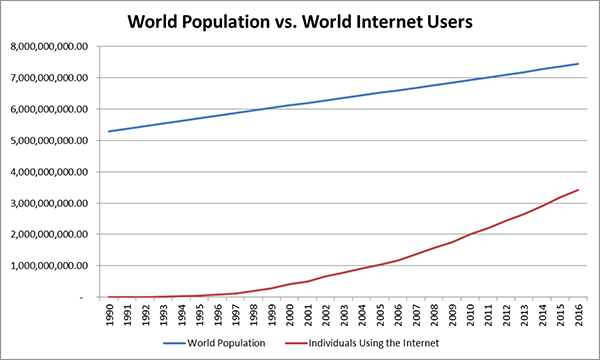