A new way to make light interact with matter

A new way of enhancing the interactions between light and matter, developed by researchers at MIT (Massachusetts Institute of Technology) and Technion (the Israel Institute of Technology) could someday lead to more efficient solar cells that collect a wider range of light wavelengths, and new kinds of lasers and light-emitting diodes (LEDs) that could have fully tunable colour emission.

The fundamental principle behind the new approach is a way to get the momentum of light particles, called photons, to more closely match that of material electrons, which are normally many orders of magnitude greater. Because of the huge disparity in momentum, these particles usually interact very weakly. Bringing their momenta closer together is believed to enable much greater control over their interactions, which could encourage research and development on these processes and new applications. 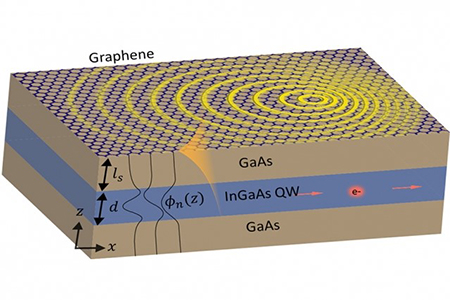 While silicon is a hugely important substance as the basis for most present-day electronics, it is relatively inefficient for applications that involve light such as LEDs and solar cells. Improving the interactions of light with an important electronics material such as silicon could be an important milestone toward integrating photonics (devices based on manipulation of light waves) with electronic semiconductor chips.

Most research looking into efficiency challenges has focused on silicon itself, whereas the MIT-Technion team have taken a different approach - trying to change the light instead of changing the silicon.

Apparently, one way to do this is by slowing down, or shrinking, the light to drastically lower the momentum of its individual photons, to get them closer to that of the electrons. The researchers have shown that light could be slowed by a factor of a thousand by passing it through a kind of multilayered thin-film material overlaid with a layer of graphene. The layered material, made of gallium arsenide and indium gallium arsenide layers, alters the behaviour of photons passing through it in a highly controllable way. This process effectively shrinks the wavelengths of light by orders of magnitude, bringing it down “almost to the atomic scale.”

Because of this shrinkage, the light can then be absorbed by the semiconductor, or emitted by it. In the graphene-based material, these properties can actually be controlled directly by simply varying a voltage applied to the graphene layer.

Although the work is still at an early and theoretical stage, the researchers note that this approach could lead to new kinds of solar cells capable of absorbing a wider range of light wavelengths, which would make the devices more efficient at converting sunlight to electricity. It could also lead to light-producing devices, such as lasers and LEDs, that could be tuned electronically to produce a wide range of colours.

Once again, the unique properties of advanced materials like indium, gallium and graphene (as noted above) and a suite of others like the rare earths, lithium and tin are enabling even greater advances in physics and chemistry to deliver a better future for all of us.  Until soon… Ian