We have discussed “wearable tech” previously here, but the technology keeps getting better and better –like technology that will be indistinguishable from clothing fabric. This is way beyond smartwatches, folks!

In fact, GlobalData estimates that the wearable tech industry was worth nearly $23 billion in 2018 and forecasts it to grow at a compound annual growth rate of 19% to reach $54 billion by 2023. While GlobalData expects market growth will be driven by sales of ever-evolving smartwatches, wearable tech also includes medical apparatuses, gaming gear and safety devices.

Wide spread adoption of wearable tech is hindered by a few fundamentals – for one, wearable tech needs to be physically flexible…and washable. However, a new transistor shows a lot of promise for advancements in this field.

As Andrew Masterson reports at Cosmos Magazine, “a newly invented fibrous organic transistor coated in a crystalline nanostructure looks set to revolutionise the rapidly growing field of wearable tech.” It was designed by a team from the Korea Institute of Science and Technology.

The transistor is made of a double-stranded assembly of electrode microfibres inside an organic semiconductor sheath. In experiments, the device continued to work without interruption after being repeatedly bent, twisted and immersed in a strong detergent solution. 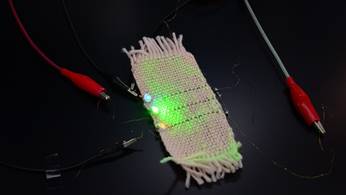 The fact that the transistor can handle being washed (presumably alongside ordinary fabrics) is extraordinary. Many designs and uses of wearable tech are constrained by the electronic components needing to be removable to avoid the potential hazards of system failure or electrocution.

There may be an interesting solution to charging wearable tech…a separate team, led by Carter Haines of the University of Texas, has created a type of yarn constructed from carbon nanotubes. Dubbed the “twistron,” the yarn generates electricity when stretched or twisted. Stretchy nanotube yarn could be woven into shirt fabrics to power wearable tech, as the twistron sources electrical energy from the body’s motion and heartbeat.

To create the basic structure for their invention, Haines and his team compiled component nanotubes (carbon tubes 10,000 times smaller than the width of a human hair); coated them with electrolytes; and finally twisted them together. The tighter the yarns were twisted, the closer together the electric charges embedded in them became, increasing their energy output. The scientists calculated that stretching them 30 times a second produced around 240 watts of power per kilogram of yarn. 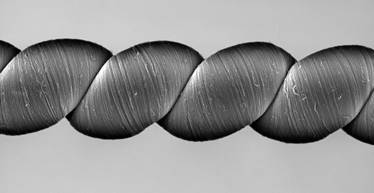 Haines and his colleagues see twistron as a possible solution to one of the major hurdles facing developers of wearable tech. Harvesting electrical energy from human motion is one strategy for eliminating the need for batteries!

These are just two examples of ongoing research that will one day make wearable tech a lot more popular. With the technology in place, options are endless - from wearable computers for gaming, or clothing that can discretely monitor the vital signs of the wearer. All thanks to advanced materials!