Toronto, ON -- Avalon Rare Metals Inc. (TSX:AVL)(OTCQX:AVARF) ("Avalon" or the "Company") is pleased to provide an update on recent progress of the 2010 winter work program on its Nechalacho rare earth elements ("REE") deposit (the "Project"), at Thor Lake in the Northwest Territories of Canada. Drilling commenced in January and a second drill rig was mobilized in February. This rig has commenced drilling on exploration targets on the southern extension of the deposit.

Drilling commenced with one drill rig as of January 17, 2010 and to date 17 drill holes, totalling 3,750 metres have now been completed. On February 21, 2010, a second drill was successfully mobilized to the Project by ice road approximately 125 kilometres along the northern shore of the Great Slave Lake under contract with Deton'Cho Logistics. The mobilization was planned to occur three weeks earlier, however, warm weather and poor ice conditions delayed the safe transport of the drill.

The first drill ("Rig #1") is focusing on (1) areas adjacent to the main indicated mineral resource that were not accessible in summer, due to wet ground conditions and (2) drilling along Long Lake to extend the heavy rare earth ("HREE") rich mineralization indicated in hole L09-206 (14.2 metres averaging 1.90% TREO with 29% HREO) and define Indicated resources in this area. Rig #1 will also expand and better define the Indicated resources in the southern part of the Nechalacho deposit, which is the focus of the present Prefeasibility Study. This area is already known to contain the previously announced 9.00 million tonnes at 1.86% TREO, 0.43% HREO and 23.1% HREO/TREO at the 1.6% TREO cutoff grade.

The second drill ("Rig #2"), which has greater depth capacity than Rig #1, will initially test the extension of the known zone immediately south of Long Lake, and then combine this exploration work with condemnation drilling of proposed plant site, airstrip and tailings site. This drill has commenced with a vertical hole immediately south of drill hole L09-155 on the ridge to the south of Long Lake, in order to test for the Basal Zone continuation south of Long Lake beneath barren cover rocks as suggested from current geological and geophysical modeling of the geometry of the deposit. The hole is in progress as at the date of this release.

Initial assay results for Rig #1 are on hand for the first two holes of the winter program. Drill hole L10-207 was collared to test the extension of the deep Basal Zone intercept in hole L09-206 (above) and L08-132 (2.19% TREO with 32.0% HREO over 7.4m). Hole L10-207 was a step-out in the middle of Long Lake, about 100 metres southeast of L09-206 and produced an exceptionally wide intercept of HREE rich mineralization averaging 1.89% TREO, 27.2% HREO over 43.0 metres. (See Figure 1 for location map or on Avalon website.) Note that the Basal Zone exhibits a trend for increasing thickness toward the south, from 7.4 metres in L08-132, 14.2 metres in L09-206 to 43.0 metres in L10-207, providing considerable incentive to continue testing further south. All intercepts in vertical holes are believed to approximate true thicknesses.

Drill hole L10-208, in the middle of Long Lake and south of L07-63, did not intercept significant mineralization. This hole confirmed the presence of a 100 metre wide linear "break" in the continuity of the Basal Zone mineralization (defined earlier by holes L07-62, L08-112 and L09-162) along a NNE trend in the central part of the deposit.

The assays results of drill hole L10-207 highlight the potential to develop a new significant block of high HREE rich mineralization in the Basal Zone west of the "break" described above. The Basal Zone is wide open for expansion to the west and south of drill hole L10-207. Rig #1 is presently drilling east of North Tardiff Lake, but additional definition drill holes are planned around L10-207 during this winter program, in an effort to bring more of this mineralization into the Indicated resource category.

The Company has received one new Land Use Permit and an amendment to the existing permit during the last month. The existing permit MV2007C0039 was extended for a further two years in July 2009. An amendment was approved to this permit as of January 21, 2010 to add a second drill rig to the one already operating on the property.

Further, the Company had applied for, and was issued, a Type A Land Use Permit MV2010G0001 for the construction of an airstrip at the Thor Lake project. This permit is for a period of 18 months commencing January 21, 2010 and expiring July 4, 2011. It is planned to construct a short takeoff and landing airstrip at the site in early Summer 2010. The airstrip will enable access in all seasons to short takeoff and landing aircraft and remove the necessity to use aircraft on floats or skis, thus reducing operating costs, increasing payloads, improving safety and shortening the flying time to the Project. This airstrip is also chosen so that it can be extended in the future to enable aircraft such as Bombardier Dash 7 of 8 to land at site. A contract has been given to Deton'Cho Logistics, a company owned by the Yellowknives Dene First Nation, for the construction of the airstrip.

These land use permits are publicly accessible on the MacKenzie Valley Land and Water Board website (http://www.mvlwb.com).

On February 12, 2010, Avalon's Nechalacho deposit site was inspected by both the Indian and Northern Affairs Land Use Inspector and the Inspector of Mines (NWT Workers' Safety and Compensation Commission). A summary of the report was issued to Avalon on February 13, 2010 and states, "Overall the entire operation is being conducted in an environmentally sound manner, and no major concerns were noted during the inspection". The Land Use inspection report is available at http://www.avalonraremetals.com/sustainability.

Scott Wilson RPA is making excellent progress on the Thor Lake Project, Nechalacho deposit, Prefeasibility Study, with its completion still anticipated for this Spring. With feedback from northern communities and aboriginal stakeholders Avalon, under the leadership of David Swisher, VP, Operations, has made a baseline decision regarding mine design, general site infrastructure, and transportation logistics. The following bullet points highlight the general baseline design criteria considered for the Prefeasibility Study:

Community meetings and engagement with Avalon's aboriginal stakeholders continues to be a priority, and as such, meetings were held in the first two months of this year with groups along the North and South shore of the Great Slave Lake. All meetings to date have been constructive and feedback from Avalon's aboriginal stakeholders has positively contributed to infrastructure logistics currently being included in Avalon's Prefeasibility Study of the Nechalacho deposit.

All drill cores from the 2010 program was split on site, sampled on two metre intervals and shipped to the ALS Chemex facility in Vancouver, BC, for sample preparation. Analytical standards were prepared from crushed rejects of historical Lake Zone samples, then analysed at five separate laboratories to determine reproducible values. These standards were then routinely inserted into the sample batches to monitor core analyses. Barren diabase drill core is inserted as blanks. Selected duplicates are also analyzed at an alternative independent laboratory. The results reported to date were produced by ALS Chemex and achieved acceptable standard values for the main REE of economic interest (Neodymium, Terbium and Dysprosium).

All samples are analysed by lithium metaborate/tetraborate fusion and dilute nitric acid digestion, followed by whole rock and 45 element multi-element ICP analysis, being ALS sample method ME-MS81. Commencing with hole L09-137, all samples contained within intercepts above the 1.6% cut-off criteria and any additional samples exceeding analytical limits or of geological significance are rerun using similar ALS method ME-MS81H for higher concentration levels. ME-MS81H is a similar method but with greater dilution in the analytical procedure.

Details of the factors used to calculate rare earth oxides are posted on the Company website along with complete analytical data. Drilling operations were performed by Foraco Drilling Ltd. of Yellowknife, NWT under the supervision of J.C. Pedersen, P.Geo. Bruce Hudgins, P.Geo., maintains the geological database and monitors QA/QC on the laboratory analyses. The Company's Vice-President, Exploration, William Mercer, Ph.D., P.Geo. (Ont), P. Geol (NWT) provided overall direction on the project. The qualified persons for the purposes of this news release are Bruce Hudgins, consultant to Avalon, William Mercer and D.S. Bubar, P. Geo., President.

About Avalon Rare Metals Inc. (TSX:AVL) (OTCQX:AVARF)
Avalon Rare Metals Inc. is a mineral exploration and development company focused on rare metals deposits in Canada. Its flagship project, the 100%-owned Nechalacho Deposit, Thor Lake, NWT, is emerging as one of the largest undeveloped rare earth elements resources in the world. Its exceptional enrichment in the more valuable 'heavy' rare earth elements, which are key to enabling advances in green energy technology and other growing high-tech applications, is one of the few potential sources of these critical elements outside of China, currently the source of 95% of world supply. Avalon is well funded, has no debt and its work programs are progressing steadily. Social responsibility and environmental stewardship are corporate cornerstones.

To find out more about Avalon Rare Metals Inc., please visit our website at www.avalonraremetals.com. For questions and feedback, please e-mail the Company at office@avalonraremetals.com or phone William Mercer, Ph.D., P.Geo., VP Exploration, at 416-364-4938. For general discussion and commentary on the rare metals, please visit www.raremetalblog.com. 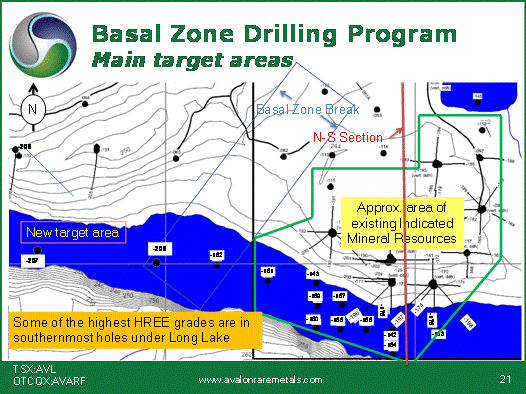